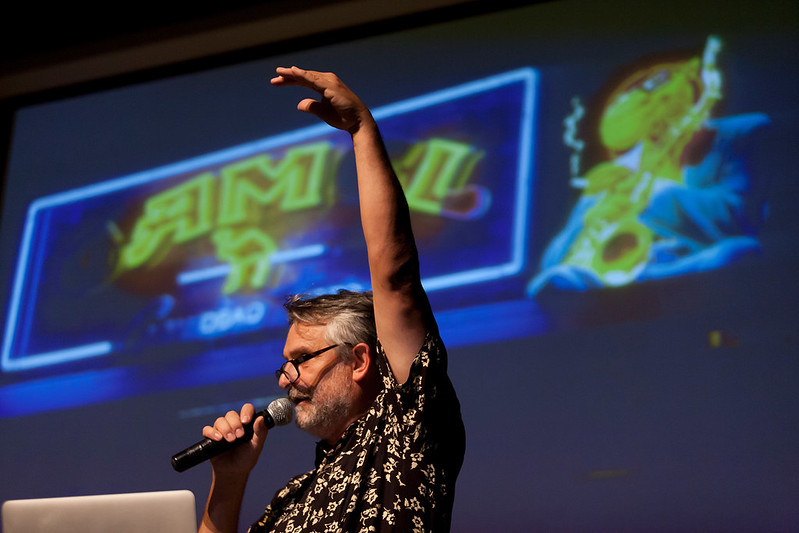 Every year since 2004 The Influencers festival has been inviting artists, hacktivists and researchers to share with the audience their experience with rebellious projects, inventions and adventures in the unstable realm where everyday technology and collective imagination collide, often times with unexpected results.

We've been talking about art and networks, new and old pranksterism, fakes and hoaxes,  online user cultures, radical memetics, critical engineering, up to urban exploration and hacking, touching upon general topics as the materiality of the internet, mass surveillance, the symbolic efficacy of images, the power of fiction in the age of social media realism, collective intelligence and the role of the artist, innovation through remix and hacker culture, among many many others.

Also, at The Influencers there will be always room for fringe, visionary, crazy ideas. An example? Zero gravity theater, a tall bike gang, setting up a bot to buy stuff on the darknets, collecting patches of US army secret missions, or sculpting radioactive materials (among many many others).

More than ten years since its first edition, the festival has grown to become a renown cultural event in Barcelona and Catalonia, with an increasing international repercussion.

From 2014 to 2016 The Influencers was part of Masters & Servers, a joint venture between Abandon Normal Devices (UK), Aksioma Institute for Contemporary Art (Slovenia), Drugo More (Croatia) and Link Center for the Arts of the Information Age (Italy) and us. The project was the recipient of a European Union's Creative Europe fund for cooperation.

The Influencers aims at exploring the connections between post-studio artistic practices, the evolution in communication technologies and the always surprising paths of cultural change in an increasingly networked society. The prehistory of the project lies in the 'Digital Is Not Analog' series of artist talks and conferences produced in Bologna and Campobasso (Italy) and Barcelona (Spain) between 2000 and 2002.


Our early interest in net.art and other ingenious forms of subversion of popular media soon evolved into The Influencers festival (Center of Contemporary Culture of Barcelona, 2004), a passionate journey into a surprising, thrilling and yet mostly unacknowledged scene of artists, media-savvy activists and independent technologists in the age of digital media.

In the last decade, not only that scene became more and more popular and legit (hopefully thanks to our humble contribution, too), but deep technological, cultural and socio-economical changes on a global scale provoked a quick evolution in creative practices themselves, calling for new ways of sharing information, tecniques and strategies in an increasingly connected world.

Contemporary society is defined by a complex stack of communication technologies, cultural habits, circulating imagery, and invisible power structures. The Influencers sets out to show that this stack can be exposed and ultimately hacked through new approaches to art-making and post-digital invention, among other things. And that is precisely where unexpected and exciting alternatives to a mostly dismal future will be found.
Tweets by the_influencers