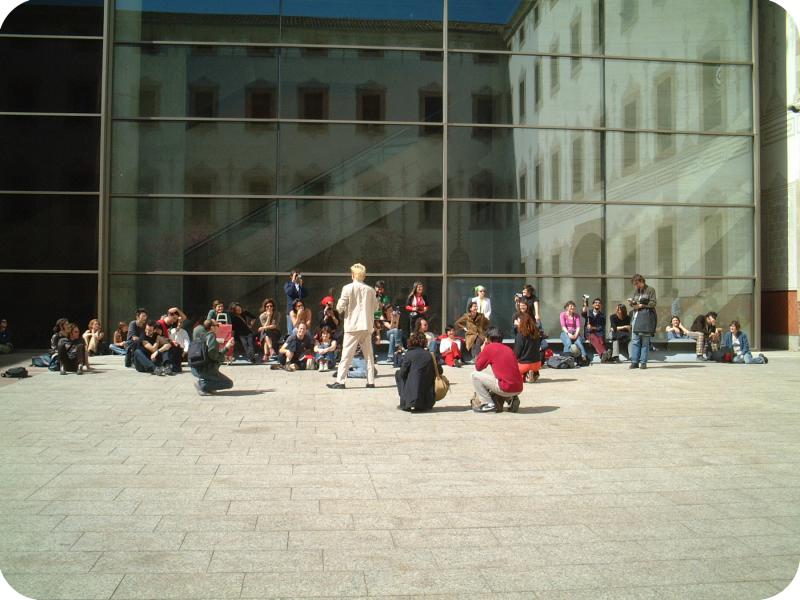 "They took us to the Starbucks as soon as Billy and I landed...

It sits there, all alone, on a strange little tourist peninsula, jutting out into a grand plaza on the edge of the old city. The Starbucks sign, the great green logo, is huge, much bigger than the plate glass windows that front the place, much bigger, in fact, than anything in sight. We stood there watching the trash barrel fill up and overflow with cups. Barcelona is just not a place where people walk around with coffee, unlike say, New York where coffee is little more than a portable stimulant. The disjuncture between real cafe culture and Starbucks became increasingly clear as we watched every to-go cup pile up in the trashcan. Lumpy mounds of white cups marked the perimeter: inside lay a texture-less anywhere, and outside rose the sexy, story-filled Barcelona...."

Later, at the hotel, we slept off the long day of travel. I woke up in the middle of the night. Billy was gone. Through our open window I heard a truck pull up to the gated kiosk across the way and deliver the morning papers; some nineties techno music hovered around a dance club down the block.

Billy came in a few minutes later. His eyes were wild.

"That Starbucks is like an alien.... a gigantic spaceship shipped in from another planet. Who invited it? Did the people of Barcelona say "We want a Starbucks? 'Hey! Hey Starbucks, please! We need you. Come here. Come to Barcelona! We don't have enough coffee in Barcelona! We don't already have the best coffee in the world so, Please! Please!"

"Maybe," I said, "maybe they'll just reject it, like a transplanted kidney."

When we woke up the next day we decided to induce a mass organ rejection.

We explained this to our translator, Nuria, a young Spanish woman who spoke English with an Australian accent. She shook her head, not sure if we were serious, "I don't know," she said. "Pretend we would eat the place?" Fifty or so people met us in the courtyard of the museum that was the center of the week's activities. We sat in the shade of a large glassy building and talked through the action.

When Nuria relayed these directions there was some murmurs and groans, "There is a little confusion," she said, "People think... do you actually mean lick, actually lick it?"

"Yes!" Billy yelled "the building, the walls, the windows, the sign, the equipment."

Billy demonstrated, licking his bullhorn. Then he got down on his knees and started licking the courtyard. The crowd's enthusiasm did rise, but only slowly, and the disgust simmered there, not quite laid to rest.

We stood up together.

And so we paraded from the museum courtyard and out into the street, past graffitied walls and into the narrow canyons of the old city, the densest section of which lay between us and the Starbucks.

We overran an alley full of hookers in tight athletic clothes leaning on shops full of hanging meat and mobile phones. We clapped and shouted two and three and seven abreast, bolstered by the grand civic whimsy of Gaudi's magical sand castle spires. Lickalujah! We marched. The Starbucks sign revealed itself just as we emerged from the narrow and nearly car-less streets of the old city. The mermaid hung there like an unwieldy airship, demanding our gaze and denying us the satisfying traction of beauty or meaning. Just a distended logo-blimp, ready to be popped.

www.terra.org
Billy dropped to his knees a few feet from the door of the Starbucks and lifted his palms in prayer, "What is this strange life form? What is this? What is it doing here? …And why does that mermaid have no nipples?"

Catholicism is strong in Spain. The church, the priest, the collar: these are powerful symbols, and the sight of this crazed American in holy garb on his knees in front of the Starbucks drew people close, with traffic piling up on either side. Billy's face was a pumping scarlet cartoon.

He took a deep breath and crawled toward the entrance, he licked the bottom of the door, then the handle, and then, as he lunged inside, we swarmed. I and several others took our post along the picture windows, licking the outside, while the others—too many to count—went in and licked the counters and the chairs and the inside of the windows. It was like a Hieronymus Bosch painting come to life, dozens of bodies writhed around, their mouths open, their tongues grazing all available surfaces. I saw Billy whispering a little apology into the ear of an amazed barista and found myself in long flat eye contact with an American girl in a thick red sweatshirt. I was licking the window just a few inches from her face and she was, impossibly, ignoring the chaos around her, fiddling with her mp3s, scraping the foam off her whateveruccino with a plastic spoon. She closed her eyes and tipped her head to the right, revealing Billy in his new position behind the counter. He was licking the machine, and then he put his whole mouth on the steam nozzle and started sucking.

www.terra.org
A smiling ten-year-old boy with one eye on the action sidled away from his parents who sat, quietly reading the International Herald Tribune, their hands groping at cups and muffins absentmindedly while a beautiful girl with pink hair chewed on their table.

From our licking location outside it was soundless, dreamy and far away, a fantastic human aquarium. I stopped for a second. Just to watch. It was beautiful. When I started licking again even the street sounds faded. I couldn't hear anything. I was falling. I saw Billy crouching below the counter and as people started to dance, I ran inside.

Billy had climbed on to the counter and was offering communion with the silver milk pitchers; there were people licking each other by now, we were seconds away from a full on smash up ecstatic riot, and Billy shouted:

"Do you reject the devil Starbucks?"

The crowd cried, "Lickalujah!" Billy danced and shook and fell from the counter, tumbling out the door, his suit splattered with obscene milk stains.

Knowing the cops couldn't be far away I led the group one way and let Billy escape down a side street with just a handful of people. They shouted "Lickalujah! Lamerlujah!" up at the open deck of a tour bus.

Everyone was elated and wanted to go to another Starbucks; I thought that was a bad idea. A girl from Brooklyn assured us that the cops were different in Barcelona; "They don't care about stuff like this," she said. I shook my head.  "They always show up and they always care. Once is enough." I trust my instincts when it comes to cops and chain-stores. We regrouped by some Christians at a charity table who thought Billy was a "real" priest and asked if he had ever done any missionary work. Before he could answer, four young men in stiff white shirts and serious black hats appeared. Cops. Right on schedule.

They hustled Billy and me away from the group, demanding our passports. A reporter from El País made herself known to the police, and stood by with a photographer and a Catalan lawyer friend. About fifty others, some with video cameras, stood on the sidewalk a few feet away.

The cops told them to turn the cameras off. No one did. The police got mad and started yelling. I had a little jolt of despair. This same sad scene plays out everywhere I go. Cops issue arbitrary demands and the people say no. Today the will of the people prevailed and the cameras stayed trained on the cops.

The policeman in charge got a call and stepped away from the car.

Our lawyer friend told us not to worry, things really had changed.  These police are too young to have been Fascists, he said; the older ones are much crueler. It's different now. Just ten years ago I was arrested for speaking Catalan, he said, just down the street, by George Orwell Square. I did a double-take: George Orwell Square?

The Captain came and told us that McDonald's and KFC had called too, claiming they were under assault by a crazy American priest.  "Was there another one dressed like you?" he asked Billy. "Are there more than one of you?" No, we told him. "Yes, but you were at the Starbucks?" Yes, we said, admitting that we had been inside the Starbucks just moments ago, performing a special communion, but no, none of us had been anywhere near the KFC or the McDonald's. "So none of you were at McDonald's? Since then?" No.

The Captain had reports that we were in all the transnational chain stores in Barcelona simultaneously. Amazing. Do these chain stores share a script? Does being a hostile, predatory culture-smasher demand this automatic paranoia? And what exactly is going on here anyway? Are these other stores really claiming to have a "crazy American priest" at their own counters, or are they just afraid he's on his way? Are they hoping for some American-style preemptive policing? Is the desk captain on the other end of the phone old enough to have been a Fascist? Who are the Fascists now?

We stood around for a while, getting hot in the sun. The adrenalin rush was definitely over. The cop was on the phone again. Finally, he hung up. He walked over and handed us our passports. He was shaking his head, his whole body rhythm completely defeated. "Please don't go back to Starbucks," he said, and with a hopeless flick of the wrist, he sent us on our way.

In our work with the Church of Stop Shopping, we try to create a parallel point of contact with the market, one entirely unrelated to the terms it makes. Licking the Starbucks might seem whimsical. But, leaving something other than your money in a chain-store is a powerful thing. Expanding the autonomous self into retail space is meaningful. Refusing to take into your body what it wants, and instead forcing your body into it and creating a point of contact other than the dollar-for-product exchange redefines our relationship to the market. Start small. Leave a few skin cells on the counter. Later we can plant trees in the aisles of an abandoned Wal-Mart.

We call the elaborate mechanism that keeps America from becoming our dreamed-of America the Commodity Wall. It protects the market from our efforts to democratize it, and is not quite a wall. It is more like an interface, or a phase change. It is the slippery surface coated by advertising; it is the ionic imbalance of the supermall, the sickening overabundance of brands and logos, the cops outside McDonald's, the overplayed hit single. The Commodity Wall takes a supernatural number of forms; it is more clever than culture and often disguises itself as art. Lives and dreams are staked to it; parents and politicians take their cues from it. Sometimes it adds to the confusion by stimulating the reflex of actual necessity, but more often it plays into a desire that it invented just for you. Whatever form the Wall takes and whatever it is doing here, we have to remember that just on the other side of it there are millions of people fighting for their lives.