A Walk in Fukushima is an immersive 360-degree video piece filmed in and around the uninhabitable radioactive area. The intimate experience inside the inaccessible includes sites of the exhibition Don't Follow the Wind and comes in close proximity to the power plant. In the video, a former resident describes a visit to his abandoned home and his internal conflict at having worked for a company affiliated with TEPCO.

In the video, the artworks — which are installed within the exclusion zone in the former homes and workspaces of the displaced residents’ — are largely obscured by the bodies of the artists and the curatorial team, allowing them to retain their inaccessibility to, and invisibility from the outside world. The figures, in concert with the works, highlight the belief of many of the residents that the artworks are acting as placeholders until they themselves can return. The CCCB and The New Networked Normal (NNN) have co-commissioned an updating of the video originally produced in 2015. While the zone is inaccessible to the public there is a so-called clean up operation going on which is transferring waste from one area to another, trying to reduce the overall amount of radiation so residents will be allowed back to live in a low level radioactive environment that the government deems safe. 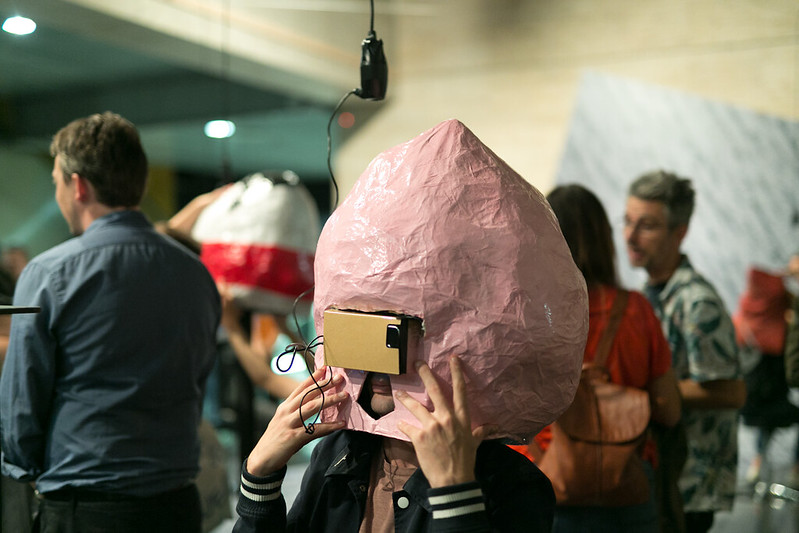 In the town of Futuba, inside the zone, a large sign over the road was installed with the slogan “Nuclear Power: Energy for a Brighter Future.” Chosen in a competition of local school children decades before the disaster, the phrase since the fallout it has been a glaring reminder of the myth of safety that was propagated before March 11, 2011. The sign is central to yet to be disclosed work of Chim↑Pom. In updating the video Don't Follow the Wind returned to the site of the removed sign and shares the account of the school child who came up with the slogan.

The headsets containing the 360-degree film are made by three generations of Fukushima family of artist Bontaro Dokuyama, who live just outside of the former zone in a contaminated area deemed 'safe to live' by the government, but with certain restrictions such as eating and selling for wild plants.

The grandson, mother, father, and grandmother all made headsets that share their objects and experiences from this new reality. Their descriptions share narratives of each headset recounting a new way of life after the catastrophe in which decisions are informed by rumor and contradictory stories from the media. Restrictions and recommendations by the government are continually changing. Many residents feel a constant sense of anxiety. The headsets and descriptions made in early 2016  reflect this uncertainty even though it many not accurately reflect present government policy. On the headsets, they express their desires for a different future through the lens of this unstable present. The emergency earthquake bag, which has been in our home, I did not use on March 11.

I was planning to attend a local festival that week, with no participants left in the town after the evacuation it never occurred.

I am constantly concerned about what I am eating. Directly after the release of radioactivity friends sent us produce from other parts of Japan so we could still eat fresh vegetables and fruits. I hope to be able to send them some of our local produce at some point in return.

I used to sit on this cushion. After the Great East Japan earthquake on March 11, 2011, I sewed the top of the cushion together to use as a helmet around my house to protect my head from falling objects during the many aftershocks that followed over the ensuing days.

I think the plants in my garden in Tamura near the Fukushima Dai-ichi Nuclear power plant are no longer edible due to the radioactive contamination. I hope one day I can use this basket again to wash the fruits and vegetables so I can eat them with my family. (*)


(*)
Local government policy on distribution of agricultural products
The description by the family members is based on their impressions and does not necessarily reflect the government policy on the distribution of agricultural products from the area. As of July 2017, the following food products from Tamura cannot be sold or consumed: wild boar, bear, spot-bill duck, pheasant, copper pheasant, hare, edible wild plants such as ginseng, ostrich fern, wild angelica tree bud, bamboo shoots, wild butterbur sprout, royal fern, and wild mushrooms. In addition, the ban extends to shiitake mushroom cultivated outdoors on logs found within a radius of 20 kilometers of the nuclear power plant.

Fresh or dried persimmons and peaches have never had restrictions in Tamura. These are based on “Okiagari-koboshi,” local toys from the Aizu region of Fukushima Prefecture in Japan. They are small traditional crafts which have been made for the past 400 years. With round bottoms, no matter how many times it is knocked over, it will stand up. No matter how painful or sad things happen, we want to definitely stand up and want to forward to the future. This “Okiagari-koboshi” has become one of the symbol of recovery after the earthquake disaster.

Seven years are going to have passed since the disaster.
We will continue to live in Fukushima and will eat vegetables and fruits grown in the land of Fukushima.
The special product of Fukushima is a peach.
Everybody is welcome to Fukushima.
Please come to eat a delicious peach from Fukushima. After the evacuation, former residents were allowed to visit their homes 15 times a year for about 5 hours at a time. The government suggests that they wear protective clothing, masks, and gloves provided by the authorities when they visit their homes. In 2016, the number of entries was increased to 30 times a year.

Some residents have not visited their homes since they were evacuated in 2011. Certain residents have only been on a single occasion to pick up mementos from their previous lives. Others visit their homes more frequently, cleaning them and undertaking maintenance in the hope that some day they will be able to live in them. Certain parts of the surrounding area outside the zone, which have also had restrictions, have re-opened after a 'clean-up' by the authorities: this consists of removing some of the irradiated material and bringing the atmospheric radiation readings down to a certain level, which they have deemed safe to live. In these re-opened areas few people have chosen to return. In Naraha, re-opened in September 2015, around 11% of residents have moved back. It is unclear when the entire Fukushima exclusion zone will be reopened for inhabitation in the future.

Eva and Franco Mattes took a number of photographs inside the zones, not images of wreckage, but rather simple photographs such as asphalt, wallpaper, grass, and mattresses, elements that constituted the lived environment of the sites. From these images they have compiled “texture packs” to be utilized by architects, designers, software developers, and others. The images from Fukushima can cover the shapes and spaces of our everyday digital world such as websites, video games, home designs and films. For CCCB the image of the mattresses found in one of sites take on a new life outside of the zone in the form of the background image of this guidebook, the wallpaper, and the image wrapping the luggage that calls back to the inaccessible homes now in your hands.

A coproduction between CCCB, The Influencers and Abandon Normal Devices (UK)

A Walk in Fukushima is part of

This project has been funded with support from the European Commission. This communication reflects the views only of the author, and the Commission cannot be held responsible for any use which may be made of the information contained therein.