“Double tap / to fix this broken heart”. “Find a rich man, marry his father”. “I only accept apologies in cash.”

Taking social media as her canvas and ‘basic bitch’/it-girl selfies as inspiration, Ulman reinvented herself as an aspiring social celebrity. Fancy hotel rooms, luxury accessories, food-porn, self-improvement memes and many details of her half-naked body, were among the dozens of images that during four months Amalia Ulman posted on her social networks accounts in what later was revealed as a complete fabrication. Or the perfect story of a successful young woman in the age of social media.

“Money, boredom, malaise, addiction, self-esteem, surgery, the provincial girl moves to the big city, wants to be a model, wants money, breaks up with her high school boyfriend and wants to change her lifestyle, enjoys singledom, runs out of money, maybe because she doesn't have a job. Because she's too self-absorbed in her narcissism, she starts going around, seeking arrangement dates, gets a sugar daddy, gets depressed, starts getting into more drugs, gets a boob job because her sugar daddy can make her feel secure about her own body again and also pays for it.”

On Facebook, she complemented the pictures with misspelled, faux-feminist sentences appropriated from the blogs and Tumblrs of real sugar-babies. The project climaxed with her cosmetic surgery hoax, followed by a long and traumatic crisis: “She goes through a breakdown, redemption takes place, the crazy bitch apologizes, the dumb-blonde turns brunette and goes back home, probably goes to rehab, then she's grounded at her family's house. The crazy bitch realized about her mistakes; she's sorry.” Depression, recovery and redemption.

“Excellences and Perfections was an analysis on the archetypes of female-perfect behavior: calmness, virtue, discretion. The apology received 240 Likes, and I received messages from people that I haven't heard from in almost five years. People had been following in silence. I had succeeded in providing the most entertaining content: another human's sorrow.” 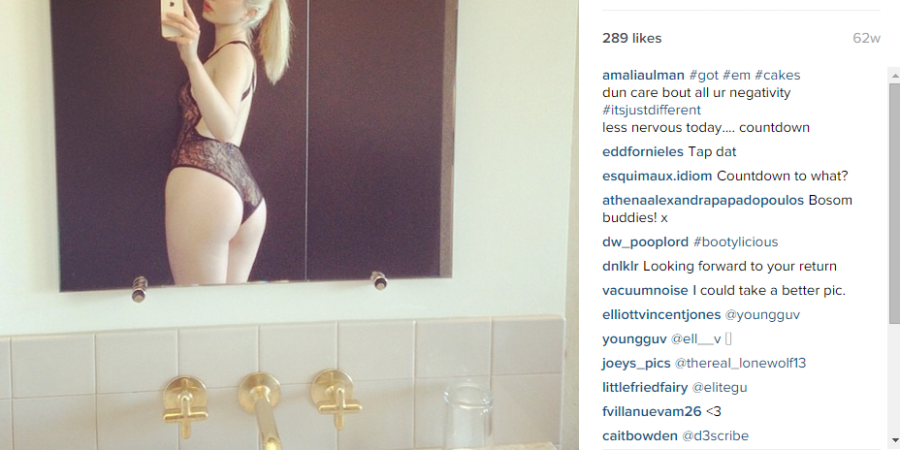 Amalia Ulman’s performance was a first-hand experiment in social discrimination, class divide, and power structures, especially when they apply to women and their bodies.  “Consumer culture relies on the ideological fiction that self-expression brings personal fulfillment and self-actualization”, says cultural observer Rob Horning. But there is a contrary tendency in the hybrid production and consumption spiral that Ulman decided to exploit as well: “the desire to make identity viral, that is, rootless and circulating for the sake of circulation and achieving an annihilating ubiquity”.